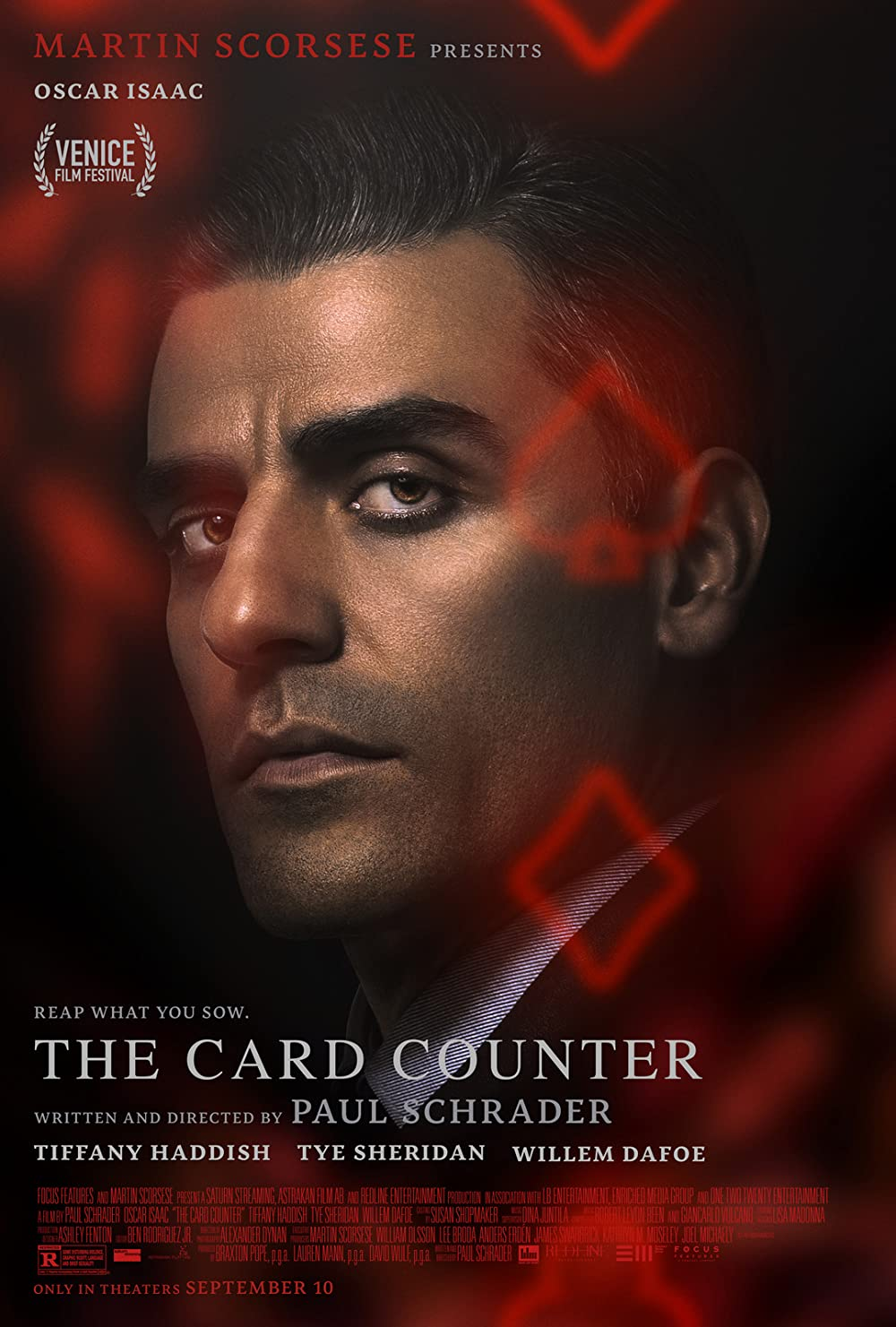 The Card Counter, a film starring Oscar Isaac is one of many crime dramas produced by Paul Schrader. Like many films produced by this same individual, The Card Counter focuses on the solitary torment of a single man. A man dealing with his previous life in a mind-numbing fashion. This was one of many movies whose filming schedule was interrupted by covid and was forced to pause for months at a time causing many viewers to question when they would actually get to see the film.

This film revolves around the main character played by Oscar Isaac is a former military interrogator. During his former life he struggled with the actions he was forced to do for his job and his gambling addiction. When a young man follows his path for revenge, it provides the main character an opportunity to get redemption for all the things he did.

This particular film has a very powerful personal drama that contains strong violence. Heavily rooted in anonymous motel rooms, roadside cafes, and casino floors, the majority of the film explores the nightlife of the main character. He is constantly battling the flashbacks of his former military life and trying desperately to drown them out. His night time activities of non-stop gambling, drinking, and relationships are his way of trying to forget.

The film provides an exploration into the zombie-like way in which people not only gamble but deal with their past or try to avoid the pain of unresolved trauma and guilt. It does so in a way that mirrors individual experiences where simple things like hearing music through the radio triggers the main character as he remembers the use of heavy metal enhanced interrogation techniques and can no longer listen to that music himself. Flashbacks happen when you don't expect them and all the while the character is trying desperately to shake the feelings and to overcome in whatever ways he can.

The main character, William Tell, is played by Oscar Isaac. Willem Dafoe, Tiffany Haddish, Tyler Sheridan, and Eatarina Baker round out the cast.  Willem Dafoe plays a former major who trained William Tell at Abu Ghraib Prison in torture techniques. Tyler Sheridan plays the young, angry man desperate for revenge upon a military major. The gambling fancier La Linda is played by Tiffany Haddish, whose role is to encourage Tell to take Cirk on a World Series of Poker tour.

This particular film is not based on a true story but it has several influences that come from the real world. Paul Schrader was originally interested in the stories of people who visited casinos on a daily basis, people who wandered into a casino and gambled regularly in a zombie-like trance. It was this curiosity that launched the backstory for the characters in this film.

Similarly, some of the real world influences highlighted in this particular game have to do with Abu ghraib prison. The prison gained Fame and notoriety for its inhumane treatment of prisoners of war. Originally it was used in the 1980s by Saddam Hussein but then was used by the United States. Throughout the film, flashbacks depicting torture scenes show the ways in which the main character was trained at Abu ghraib prison.

Additionally, Charles Graner served as an influence for the main character in the film. Charles Graner was a real-life US Army member convicted of prisoner abuse for his actions while serving at the Abu Ghraib prison.

Finally, while this is a fictional story, the character study focuses heavily on gambling as a metaphor for the journey toward redemption.

Overall, the film is evocative, with a somewhat stuttered flow that harkens to the same style as films like Taxi Driver. Given the cast list, those who are unable to see this film during its theatrical release will very likely be able to catch it online within the coming months.